I have posted, from time to time– my daughter in her school outfit for the day.    I love her style and I some mornings I feel like I can barely bear to part for the day.  These photos are from earlier in the week.  A cool morning when it was cool in the apartment.  Her great and comfy fashion sense.  A cooler day than the few before.

Mama C. reminds me that these photos have some resonance in a hard way, with current events in the world.  I am always conscious, especially as a mom, of the world we adults have participated in, created and also inherited.  And whatever you or I did or didn’t do to land us where we are, I think about our job as people and as parents, to leave the world and our young people with something better– in particular, a world in which we’ve ended racism.  I didn’t set out to write a post about Trayvon Martin or about his mama and daddy or about the racism in the world, and I wasn’t thinking about the world outside our door when I said, “go stand by the bookcase, so I can take your picture this morning”.   She (my daughter) and they (the pictures) are just beautiful.   I wish there weren’t such current meaning in these sweet, silly morning photos.  I’ll enjoy them and hope you will too–nonetheless. 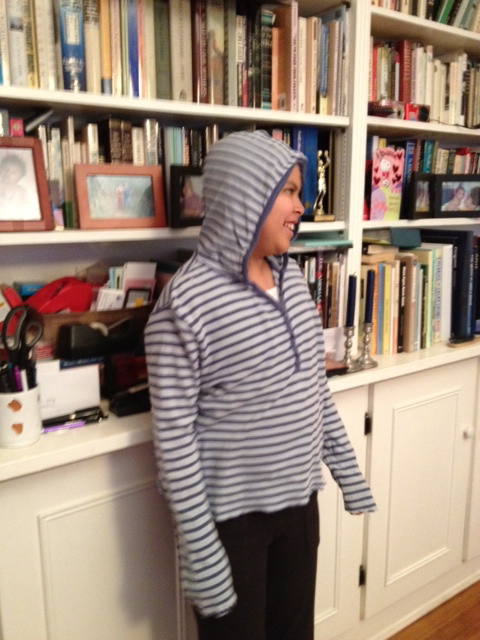 Go out and rent the movie.  Prince of Broadway.  You may love it or you may not, but it is one of the more original, interesting, real things going on out there in the film world to which I have access.  I loved it.

It’s made by an independent filmmaker named Sean Baker and his vision and his sensibility– his openness to reality flies in the face of so much of what we are fed; from the kinds of multi-million dollar homes that are depicted as “an average suburban home” in any light Hollywood romantic comedy; to the lies and utter black-is-white and down-is-up distortions of the various Republicans duking it out for the presidential nomination.  In other words, I liked the film because it is truthful in some important sense of the word.  The plot goes roughly like this.

An undocumented immigrant from Ghana named Lucky works as a hustler in a counterfeit fashion sales business in Manhattan.  He has a girlfriend.  He’s getting by.  One day a woman, his ex-girlfriend, shows up with a baby, asks Lucky to hold the beautiful 18-month old boy she is carrying “for just a minute”– and when he does so– she announces that the baby is his baby and she needs him to take care of the child.  And she bolts.  Leaves.  She says she’ll be back in two weeks.  The rest of the story goes from there.  I don’t completely know why I loved this film so much though “authentic” and truthful is one big piece, though not at all the only piece.  It is also hopeful.  It is a film that is definitely deeply flawed in certain ways, but in my book it is a perfect kind of flawed.  And so much more worth watching that most of what passes for flawless.

The 18-month old boy who is the baby in the film is a boy with whom most of us, if we still have, as my partner often says, a pulse, will be hard-pressed not to fall in love.  I thought a lot about what it must mean to make a movie with an 18-month-old in the midst of adults shouting and play-acting the things that are depicted in the film.  It is not a terrible, violent story but it is a hard story.  Harsh things happen and the environment is harsh.

One of the biggest, and perhaps only big flaw of the movie, is the fact that the 18-month-old– whose existence and whose presence in Lucky’s life, is the center of the story– that 18-month-old does none of the things an 18-month-old would do under the circumstance of actually being abandoned by his mother.  Left with a man who is, father or not, a total stranger to the boy.  But I was willing to suspend judgement and let that fly– knowing that the actor was an 18-month-old and that he was, gladly, as he was being filmed, obviously not frightened or lost in the way he would have been if those things had actually been happening.

But I think I loved this movie in part, because it is about the lives and the courage of parents.  Two parents in particular– and the challenges of parenting, under the pressures of racism, classism, poverty and other forces too.  In addition to the very hard, and the hardship– there are tremendous strengths among these characters; a clarity about rising to the occasion, a clarity about love and not abandoning our own– and in this film “our own” is not only about blood relations; and a vision of taking what life hands you and making a good life.   And those are certainly good life lessons for me and for all of us.