Shout out around the world. Now shout back at me.

I don’t spend a lot of time on these comparisons but I do keep track.  Wordpress tracks your stats for you, your traffic.  Or to be clear, WordPress, the host site for this blog, tracks the traffic on this blog, my blog, for me.  One cannot tell if the same person went back to the site ten times a day or if ten people read on a given day but WordPress tells me when the site has been viewed ten or twenty-one or thirty times.

Because of this, I know I am not the most widely read Jewish mom, writer, wanting to end racism, adoptive parent blogger out there, nor the second or third most widely read.  This blog has not been picked up or mentioned by any one of several publications that might do so and thereby increase the readership.

The comments I do get from readers have slowed from a trickle to an intermittent drip.  (I say this with the deepest gratitude to those very few of you who carry the weight of the commenting–  and with great happiness that you read this, whether you ever comment or never comment.)  I also know that in year one the blog got a certain number of hits and in year two the readership increased by about 50% and this year my readership may well decline from that of last year.  The absolute truth is I have different feelings about these facts at different times.  I’d love a wider readership and I’d especially love wider and active conversation through comments, but I am very, very happy with the readership of this blog, just as it is.

But.  Get this.  One of the amazing features of WordPress– a recently added feature, is that it tracks hits on the blog, by country.  I now know that this blog has been read by people in something like 22 or 24 countries outside the US– including Spain, Taiwan, Kenya, Dominican Republic, Venezuela, Israel, Canada, Poland, the UK and Brazil to name just a few.

I must say, now I am intrigued.  And you could do me a favor.  Any and all of you could and should comment, I would love that.  I invite you.

I became a parent later than most– in my 40’s.  Although I wasn’t by any objective standard, I spent several years after my daughter was born and came into our family, feeling like a young mother.  I wasn’t a young mother, but I sure felt like one.  Things felt new and different and hopeful and exciting.  Walking around that first summer with my very new and small baby– it all made me feel like a young mother.  I had a couple of wonderful nephews by that time (I still have them, though they too aren’t as young as they were then), but they were young enough still (8 and under) that in terms of my family– I was still used to being the younger generation for many purposes.   Like for example my nephews weren’t clued in to pop music at that point.  If they knew popular dance moves at that point, they weren’t doing them– at least not in my presence.  Then they all started to grow up, and particularly my daughter.

I have had to get used to no longer being cool.  She is cool.  I am uncool.  I still sometimes feel cool, but as she gets older she thinks I am not.    She wears cooler things than what looks good on me at this point.  She and my nephews know things that are passed on from young person to young person, things that I don’t know and have never heard of.  Music.  Turns of phrase.  Actors and tv shows.

It’s a really startling thing to have moved from cool to uncool.  I still don’t really think I am totally uncool, but it’s all very complicated and perhaps I really am totally uncool at this point.  My daughter can definitely do certain dance moves that I can kind of replicate– but well– really not.

Recently, we discovered together, some new music that we like a lot and I loaded it onto my Ipod.  I am not someone who walks around plugged into my Ipod all the time or even most of the time, but sometimes I do and lately, with this new music I do take the Ipod to the grocery store and out with me as I or we do things.  But I notice that I practically have to dance when I listen to certain things.  If my daughter is with me and I start to sway or bop even a little to the music, she tells me to “stop it, you’re embarrassing me”–  I think those are her exact words.  I don’t much like it.  Being embarrassing rather than cool, that is.  I do notice that other young people– people much older than she is but much, much younger than I am, listen to their Ipods all the time without so much as a twitch, let alone breaking out into hip-moving dance steps or belting out the refrain of a great song as they stand in line somewhere or walk past me on the sidewalk.  So I’m thinking that partly I’m just not cool anymore– that a certain part of cool just simply has to do with being part of a youth culture that no matter what I know, listen to or care about, I’ve simply aged out of.

And I’m also thinking that part of being a parent is offering yourself up as the uncool foil as your child or children age into cool-ness.  I do have a friend who is the mother of a very old friend of mind– she’s in her 80’s.  She is, and of course has always been, older than I am– since I met her 37 years ago, when I got close to her daughter, my good friend.  She (my friend’s mother who is also my friend) is, in my book, quite amazing and now, as she has moved into an age bracket that we often consider “old” I do consider her extremely cool.  She always was, but I am noticing it more now than I used to when I felt cooler myself.  I’m not in my 80’s but of course if I am lucky that is where I am heading.  So maybe I too am circling back toward cool, but for now, I just have to wait it out and try to walk around without dancing or singing as I listen to very cool music on my Ipod.  And I have to find and keep my own “cool” even as my daughter reprimands me for being just so not. 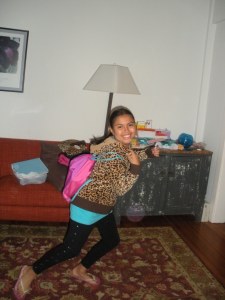 Cool, when she chooses cool clothes.

More of her style.

And then there's not even trying, just because she is. Herself. 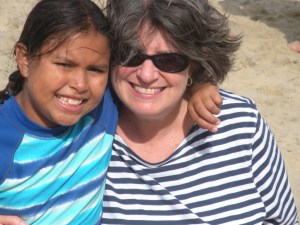 Mama and Daughter. Hard at work. From the spring archive. 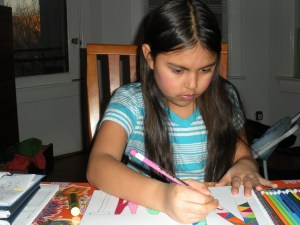 Both of us; working together, daughter very deep in concentration. I hope it will always be this way.  For her to be able to enjoy her work.  For me to enjoy mine.  For us to work together always.  On things we love and enjoy.  Together.

This post is introduction.  Or it is not introduction, but it is a first try at what might really be a longer essay– a group of essays, a book of poems that I would like to write sometime.  But to start, let me just tell this part.

I have been struggling lately, watching my daughter struggle with racism.  It is painful.  I understood from the start, from the moment we decided that we would adopt transracially, and then from the moment I learned she was born at 4 days old, and from the moment she was put into my arms at 12 days old, that it would happen.  Racism that is.  Not actually that it would happen, but that it was happening all around us; that the world she was born into had this in it and it was coming at her.  And that it was mine to join together with other mothers and fathers and young people and other adults and stop it.  Racism that is.  To end it.

Along with lunches and medical appointments, permission slips, play dates and summer camp registration, I am trying to figure out where I can throw the weight of my mind and heart and conviction to end racism.  I don’t say this to distinguish myself from your average parent, I think we all grapple with these things– more or less effectively, which is defintely my track record.  Sometimes more and sometimes less.

Racism didn’t become a pressing issue to me for the first time when my daughter came into my life.  Far from it.  But all that is another story for another time.  But from the start of our lives together as a family, I knew racism was happening , and I knew I would do my part to do the emotional work I needed to do.  Things I knew were that I had to keep facing it, to clean up as much as possible of my piece of it, to have courage to stand up for my daughter and for people of color, especially other young people of color, especially parents of color.  I knew I would do the work  I needed to do to be able to talk about it and also to be able to listen.  A lot.  To people of color and to white people struggling with their own racism, struggling to figure it out.

But the concrete– watching it come at my daughter like a train rolling on down the track, that’s a tall order some days.  Last year and then this year again, there have been some things she has wanted to do– one of which is to be on the student council at her school.  And it so happens that in her class of mostly young people of color, it is only white children who have been chosen.  Last year and again this year.  I like those girls a lot— the white girls who are the student council reps.  I like them, and they are good kids; they aren’t the problem here.  They are utterly worthy.  But they are definitely and utterly not more worthy.   So there is a problem.

Some days when we talk about this, it is almost as though I can see the inside of her mind.  Teetering on the fine edge between outrage and disbelief and captitulation.  I see her struggling with whether to resign herself to this or whether to maintain her indignation about it all.  Whether to go for it again or whether to give up.   I do not yet know what to do.  I have some ideas, and most of all I am determined to try.  Something.